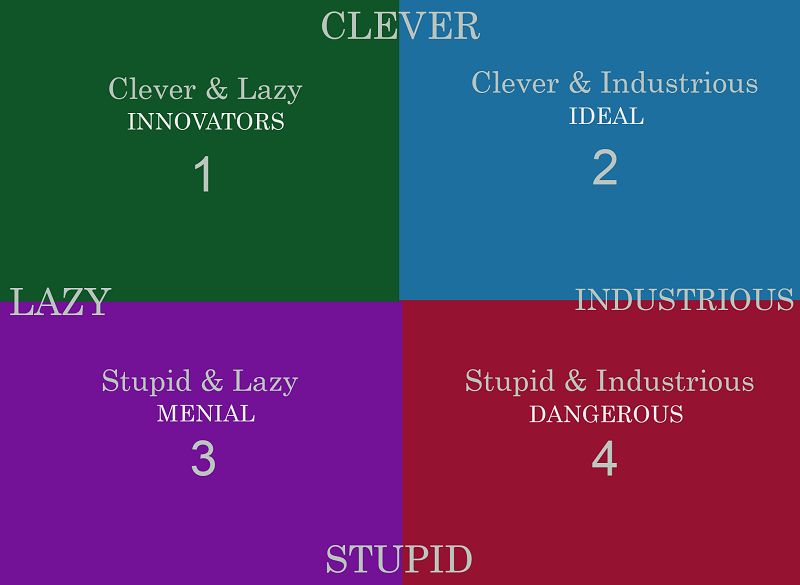 Posted by Charlie Recksieck on 2020-12-03
This is a matrix for evaluating that I first heard of about 15 years ago and find it to be some interesting food for thought. It's intent is to assess workers primitively by 2 metrics: intelligence and industriousness. The thinking being that with just those two (harsh) evaluations, one might be able to have some good general guidelines where to place somebody in your organization.


Disclaimers About Two Large Problematic Things About This

First of all, thinking of an employee as "stupid" is itself as stupid as it is unprofessional and not politically correct. For one thing, if most people in your organization are thinking of somebody as stupid, he/she shouldn't have been hired in the first place. Also, there are all kinds of intelligence, so this is a dangerous game to be playing. That said, we could probably replace the word "stupid" here with "average intelligence" and "clever" with "exceptional intelligence."

This matrix was conceived by a German military officer in the 1930's, Kurt von Hammerstein-Equord. But before you let that worry you, let me reassure you that Hammerstein while he began serving as a high-ranking German general in 1929, he was a valuable opponent of Hitler within the ranks, repeatedly part of plots to overthrow or kill Hitler and a part of the resistance. Whew!

Here's a link to the Wikipedia page for Hammerstein.

With these two metrics of enthusiasm & intelligence, we end up with four broadly-evaluated types: 1) Smart & Lazy, 2) Smart & Hard-working, 3) Stupid & Lazy and 4) Stupid & Hard-Working.

At a quick glance, you might assume that Smart & Hard-Working is always the best type of person to work with while Stupid & Lazy would be the worst. But those aren't the conclusions that get drawn from this.

I created the graphic at the head of this article, whereas I found this next graphic of the same thing in a Google search (in a few places, hard to tell where it originated to give proper credit). 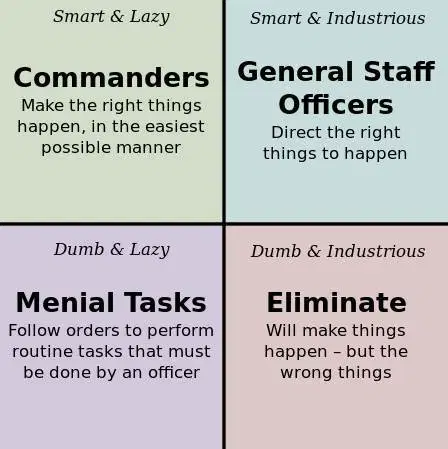 I'll make a quick sketch of the consensus thinking about these types:

We've all heard of the type of gifted student who is tough to motivate because he/she doesn't feel challenged? This quadrant of our matrix is the adult version of this kid. Supervising or managing this person might be a little tricky.

But in theory, this clever person is always looking for a way to get out of working 70 hours a week. They want to put in the time and get home. Also, these tendencies make this the ideal person to try to innovate a new way of doing things. Our term of "lazy" might be a bit of an insulting misnomer, whereas we could also say they "question the way things have to be" instead of being automatically "atta-boy" types.

These are the innovators in an organization. You don't want a company full of these people, or even a team full of them. But they have their place.

Jackpot. As you would imagine, these are ideal folks to be in your organization. Are they "the best"? Hard to say.

One imagines you would love to have mostly people from this category at every tier of your company with some 1's sprinkled in - or maybe even some 3's too. Does that seem odd? Let's get to that.

Again, I really hate using the opposite of "smart" in this evaluation because it's demeaning and ultimately never really correct. But let's again think "average intelligence" instead of "smart."

An immediate thought would be that you do not want any of these individuals in an organization. But this is where this gets interesting ... you DO want them in some roles.

X amount of the work to be done in a group setting is really more menial, undesirable work. I'm going to stress this again: I'm not saying that people who drive a truck or work on an assembly line means they are "stupid" or even "not exceptionally intelligent". But within a company, these are the jobs that require little to no thought. You want and need a not-insignificant amount of people in a company to not be professionally ambitious.

In a whole other sense, this "stupid & lazy" quadrant is subversively smart in that they usually do not have to take their work home with them, they get to be truly "off the clock" which is a position I personally would say has its merits!

Uh-oh, this is the trouble segment.

Let's think of this not so much as "industrious" as "ambitious". These are not your best thinkers or innovators who are trying to make their mark in the company, they're trying to be visible with what they can do.

That's the catch. This group are the people who are making bad decisions and actively screwing things up. In many cases, the company would be better off if they were on sick leave or disability than coming in and doing damage.

Counter-intuitively, at the bottom of our matrix, we'd rather have "lazy" people than the hard-working show-off. As unscientific and wacky this whole concept is, I think we've all worked with some people over the years whom you would throw into quadrant 4, right?


Take This With A Grain Of Salt

Clearly, "stupid" and "lazy" is not a way to really think about people you work with. And this 2-metric matrix is obviously a blunt instrument to evaluate people.

But I do find it to be an interesting concept. I hope you did too.

That said, I wouldn't use these terms on any documents in your company or H.R. department! Just keep the concept in your head, ha!

Should You Market Your Business Yourself?
Marcus Lansky
2022-03-17