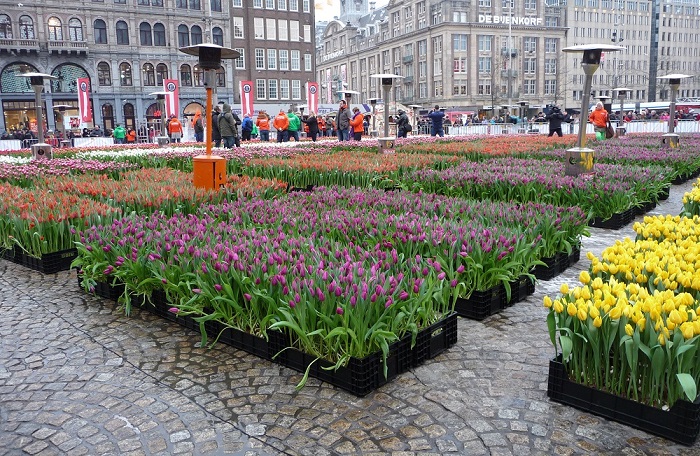 Tulip Mania
Reminds Anybody Of Cryptocurrency?

Posted by Charlie Recksieck on 2022-08-25
You likely have heard about the tulip craze in the Netherlands in the 17th century. Whether you have or you haven't, there's plenty of valid analogies to modern economic "bubbles" and some others points about Tulip Mania that seem to be overblown.

I wanted to write about it this week because I find it interesting - and also because maybe we're not all in the mood for another blog post here about some little intricacy about HTML or C+ code.


Description Of The Tulip Craze

In short, Amsterdam has always had a lively tulip market, literally and figuratively. Holland was a major economic power in the 1600's and Amsterdam in particular had a burgeoning upper class. Tulips being introduced to Europe in the mid 1500's not only proved to be hearty in cold Northern European conditions, but tulips also featured intense colors which quickly became a major status symbol of the Dutch ultra-rich.

As demand grew, more speculators came into the tulip market and even began trading on future crops of tulips not yet even planted. People were buying tulips they never saw and they became such a theoretical commodity that the tulips themselves rarely ever got transported and delivered.

Suddenly in February 1637, the bubble burst. Some claim that buyers didn't show up for a tulip auction due to a bubonic plague outbreak. But if that wasn't the reason, something else would have brought the market crashing down eventually. That's what happens to bubbles. 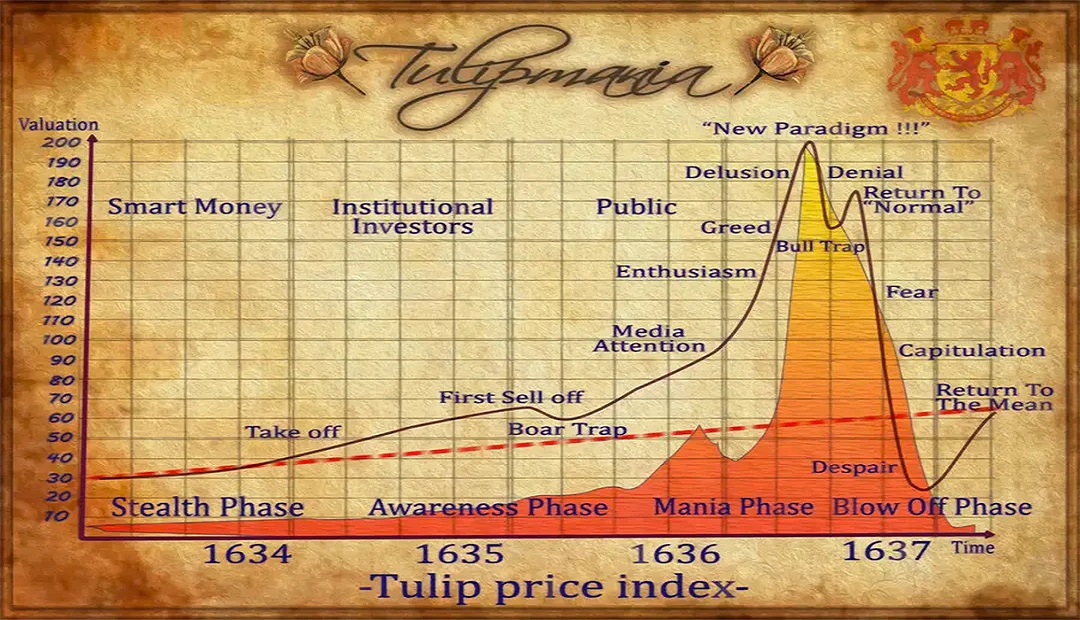 Here's a definition of a "bubble" - an economic market where prices don't match up with a supply-based reality.

There have been commodity-based bubbles in history: Tulips, silver, baseball cards. Financially, the Great Depression was triggered by a bubble bursting and most of us have lived through and can remember the dot.com bubble circa 2000.

We have cryptocurrency markets fluctuating wildly for the past 10 years. While there ARE some legitimate reasons for why some cryptocurrencies associated with blockchain tech could be expected to outperform others - which feature the most promising technological advantages, which blockchain options have been adopted by major companies - I would imagine that 90% of people in the crypto market couldn't tell you anything about the difference between Litecoin and Etherium off the top of their heads.

Just as with tulips, the people investing in the commodity are very far removed from any inherent or fundamental value of the commodity.

Why do bubbles exist? Pretty much greed. Who wouldn't want to make money by not really having to work hard? People do, falsely, see prices go up over time and just assume that that will keep happening.

The stock market and the housing market can shock the hell out of careless investors with really dire consequences. Despite Ayn Rand's claim of greed being a "rational self-interest", if non tempered with some common sense, it ends up being self-harming.

But let's face it, the reason for the crypto bubble, tulip mania and just about every speculative craze in history is FOMO. Fear Of Missing Out. The run that Bitcoin had in 2016 and 2017 was so crazy and lucrative that it drove people crazy if they missed out; so much so that they continued to load in on Bitcoin even as its "value" plummeted in 2018.

People hear about exaggerated day-trading profits or Bitcoin millionaires and it drives them to make unsound decisions. There's no way this wasn't the psychology of Dutch tulip futures investors in 1637.

Tulip Mania gets brought up a lot in comparison to cryptocurrency. Yet the analogy isn't a perfect one.

For one, non-rich Dutch folks didn't go bankrupt during the tulip craze. Not a ton of people were involved in tulip markets, it really was the playground more for the idle rich. Meanwhile, there are currently mechanisms for people who can't really afford it to get way too leveraged in day trading and cryptocurrency.

The tulip craze and subsequent crash didn't terribly effect the Dutch economy afterwards, unlike in recent times when the housing bubble really wreaked financial havoc in the U.S. and world economy.

But the seemingly-true perception implicit in the comparison is that tulip prices and cryptocurrency exchange rates have nothing to do with anything in reality, that fluctuations aren't based on any real word events or conditions.

Yes, the analogy isn't perfect. And the effect on Dutch society is indeed overrated. But there is still a lot to learn from tulipmania.

FOMO is real. Never underestimate the power of a trend.

Extraordinary Popular Delusions and the Madness of Crowds, a seminal work on the subject from the 19th-Century

HIGHLY RECOMMENDED:
The Botany of Desire by Michael Pollan, an incredible book about four different crops that have affected mankind as much as we have cultivated the plants.

Your Site Might Be Better Than ATT, Apple, Walmart
Charlie Recksieck
2020-01-16